The discussion Beach Nourishment provides a general primer on this topic and also states:


Under another state statute, the DNR may impose a royalty fee for the removal of materials dredged from the bed of Lake Michigan. As an incentive, the NRC has by rule waived the royalty if the person authorized to dredge agrees to place any suitable dredge materials along the Lake Michigan shoreline as beach nourishment for the beneficial use of the general public.

The Website of the Great Lakes Commission has a substantial amount of information on the beneficial use of dredged materials and related subjects. 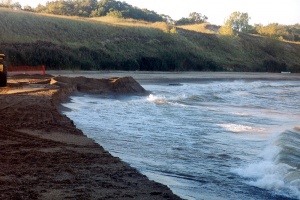 Mt. Baldy, Ogden Dunes and Beverley Shores all rely upon beach nourishment to maintain a shoreline with beaches and offshore sand bars.

Nourishment sand is regularly provided by the dredging efforts of the Northern Indiana Public Service Company (NIPSCO). NIPSCO must dredge to keep its water intake at the Bailly Plant from being clogged by sand trapped updrift of the Burns International Harbor Complex. Seventy-five percent of the dredged sand is "by-passed" to Ogden Dunes and deposited on the outer sand bar . The other 25% is "back-passed" to Beverly Shores.

Four designed beach nourishment projects have been conducted in Indiana by the federal government. In 1974, 227,00 cubic yards of sand was placed in front of Mount Baldy. The second beach nourishment in 1981 was at the same Mount Baldy location using 80,000 cubic yards (120,000 tons) of sand. By spring 1984, all the sand that had been placed on the beach was gone, and the waves were again breaking on the base of the dune.

The Crescent Dune area east of Mount Baldy received about 53,000 cubic yards of sand as mitigation for the littoral drift losses associated with the Michigan City Harbor structures. The Corps approved a local quarry as the source of sand to be used by the contractor. The beach nourishment activity began in mid July and lasted through November 1996. Additional sand was trucked to the site in 1997 and again in 1998. The long-term plan is that beach nourishment activities, resulting in the placement of up to 230,000 cubic yards of sand, will continue at five to six year intervals for the next 50 years. 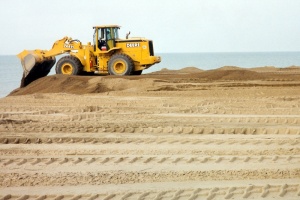 Final approval was given in October 2014 for Indiana Dunes National Lakeshore’s Shoreline Restoration and Management Plan. The plan in question is noteworthy because one of its original preferred recommendations was the construction of a “cobble berm” under 10 feet of water off Crescent Dune east of Mt. Baldy. That recommendation was abandoned, however, after the National Park Service (NPS) “received substantial comment from the public” objecting to the berm. Instead, a program of beach nourishment incorporating natural small stones mixed with sand at the shoreline will take the place of the berm. NPS heeded public comment about the plan’s original preferred recommendations in one other way: by increasing the proposed frequency of beach nourishment along the Portage Lakefront and Riverwalk site and at West Beach to every year, instead of every five years.

The Fiscal Year 2017 Civil Works Budget for the U.S. Army Corps of Engineers provides $4.62 billion in gross discretionary funding for the Civil Works program. This budget lists proposed projects and the associated budget justification by state.