Oregon does not allow beach "grooming." They do permit foredune management as special area management plans for small areas where sand inundation is a problem for residential homes. These approved plans allow grading within certain perimeters but also require planting and maintaining vegetation to stabilize the sand.

"Wildlife friendly" grooming protocols have been established as part of a Foredune Management Plan conducted in compliance with the guidelines set out by the Oregon Coastal Management Program and carried out and monitored by a qualified coastal geologist.

Oregon has policies related to beach fill that consider the potential impacts of beach fill projects on beach ecology. Fill projects must comply with standards under Goal 18 for Beaches and Dunes and the Oregon Parks and Recreation Department (OPRD) rules for Ocean Shore permits.

Bulldozing on sandy beaches is not permitted unless it is being conducted as part of the Foredune Management Plan or a Habitat Restoration project.[1]

In addition, the Ocean Shore Management Plan has made recommendations for changing some of the existing regulations on beach driving (page 88, OSMP).

The Oregon State Marine Board has rules for the operation of motorized Personal Water Craft (PWCs). These are found here. Also see here.

The Oregon Parks and Recreation Department is planning for its Ocean Shore jurisdiction. This effort has resulted in two plan documents. The first plan is a comprehensive look at all of OPRD´s regulatory and management responsibilities for the Ocean Shore, the Ocean Shore Management Plan. The second is the Habitat Conservation Plan for the Western Snowy Plover, a state and federally threatened shore bird.

The Oregon Coastal Management Program submitted a Coastal and Estuarine Land Conservation Plan to NOAA's Office of Coastal Resource Management (OCRM) in December 2005. OCRM provided comments to Oregon in late 2006, and the OCMP revised the CELCP Plan and re-submitted it to OCRM in July 2007. OCRM has provided additional comments to Oregon on the revised draft. The OCMP anticipates revising Oregon's draft CELCP Plan in 2011. 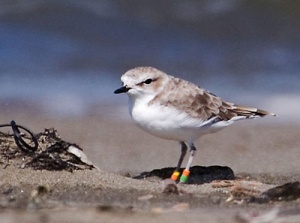 Oregon has several programs in place for collecting data related to beach ecology. The Oregon Parks and Recreation Department has completed a coast-wide assessment of ecological resources as part of its development of an Ocean Shore Management Plan and the Snowy Plover Habitat Conservation Plan (HCP).

The Oregon Department of Fish and Wildlife (ODFW) also conducts research and maps habitat areas along the coast. The Oregon Coastal Management Program helps to fund this research, specifically those areas of rocky shore habitat, and incorporate that data into management decisions made under the Territorial Sea Plan and Rocky Shore management planning efforts.

ODFW collects species-specific data on several species that occur on sandy beaches. These data are related to beach ecology in that each species abundance is partially controlled by, or reflective of, ecological characteristics of the beaches.

Oregon monitors a number of listed fauna and flora species that use the beach, including snowy plover, pink sand verbena, salmon, and stellar sea lion. Snowy plover and salmon are listed as endangered species. These species are not monitored specifically as indicators of "beach health", but more of general ecosystem health. Baseline information on abundance and distribution has been collected, with the most recent inventory for each species generally completed within the last 3 years.[2]

The Oregon Nearshore Strategy, developed by ODFW, is a management strategy for the state’s nearshore environment, including the beach. The strategy lists priority species for the nearshore under different categories. Pages 55 and 56 of the strategy document lists these “priority” species. In addition, the Oregon Conservation Strategy lists bird species that occur on sandy beaches including Western snowy plover, Aleutian Canada goose, black oystercatcher, California brown pelican, and Caspian tern.

An article published in The Register Guard in January 2013 discussed the growing problem of invasive species on Oregon's beaches. From the article:

"Vast expanses of open sand are being overrun, under attack from invasive plants — in particular tenacious European beachgrass and Scotch broom — and shore pine. Compare current aerial photos to some taken in the 1950s or before, and the creep of green over white is unmistakable. At ground level, Forest Service markers show the ongoing, powerful march of vegetation: In some areas it’s advancing as fast as 5 feet a year. [...] The invasive species created a mountainous foredune at the point where the beach and the dunes meet, behind which wetlands replaced what had been dry, open sand. There and elsewhere vegetation has proliferated."

The Oregon Coastal Program is capitalizing on its strengths in data management and planning to develop a strong foundation for communities to assist them with updating the estuary management plans and enabling them to make decisions based on current information.

In 1999, the Department of Land Conservation and Development (DLCD) provided OCMP funds to Oregon Department of Fish and Wildlife to support three tide-pool volunteer programs, which not only provided awareness of the resource, but also provided for protection of the fragile habitats and the rocky shores. The projects included:

In 1998 and 1999 the Oregon Parks and Recreation Department (OPRD),through an interagency cooperative agreement with DLCD that provided CZM § 309 funds, employed ranger-interpreters for four heavily visited rocky shore sites on coastal State parks: Seal Rock, Neptune, Devil’s Punchbowl and Cape Arango/Sunset Bay. The four summer rangers met visitors and conducted interpretive walks and learning sessions to stimulate visitor awareness and understanding of rocky shore resources. The Rocky Shores Final report was prepared to provide information based on the experience of the seasonal Rocky Shores park interpreter in the Nehalem Bay Management Unit during the summer of 2000 and help with the development of future interpretive programs within the Oregon State Parks. The program was such a success that the OPRD took over funding the program as a part of its ongoing program in 2001.


NOAA's Environmental Sensitivity Index (ESI) maps provide a concise summary of coastal resources that are at risk if an oil spill occurs nearby. Examples of at-risk resources include biological resources (such as birds and shellfish beds), sensitive shorelines (such as marshes and tidal flats), and human-use resources (such as public beaches and parks).