The Rhode Island Coastal Resources Management Program states as one of its goals "to protect the scenic and ecologic value of beaches."

Policies to protect the ecology of sandy beaches, barrier beaches, and dunes include:

Rhode Island has established policies to regulate vehicle use on barrier beaches. http://www.crmc.state.ri.us/offroadvehicles/BeachVehicleRegs.pdf

The Division of Fish and Wildlife protects, restores, and manages the fish and wildlife resources of the state. The Division is responsible for operating and managing 24 wildlife management areas totaling over 46,000 acres.

The Division is responsible for setting seasons, size limits, methods of taking, and daily limits for the harvest of all wildlife as well as all recreational and commercial fisheries in the state. They are divided into three separate sections: Marine Fisheries, Freshwater Fisheries, and Wildlife Management. Each section is responsible for specific program activities. These activities include fisheries and wildlife research and management, habitat restoration, land acquisition, and education and information.

Pursuant to the State Appropriations Act of 2002 (Public Law 107-77), the Secretary of Commerce established a Coastal and Estuarine Land Conservation Program (Program) for the purpose of protecting important coastal and estuarine areas that have significant conservation, recreation, ecological, historical, or aesthetic values, or that are threatened by conversion from their natural or recreational state to other uses. The Program gives priority to lands that can be effectively managed and protected and that have significant ecological value.

The law further directs the secretary to establish guidelines that would make project selection within the Program a more objective and nationally competitive process. To meet this directive, the National Oceanic and Atmospheric Administration (NOAA) publishes Program guidelines that establish the Program's eligibility, and procedural and programmatic requirements for participation. Coastal states that submit grant applications under the Program must develop a NOAA approved Coastal and Estuarine Land Conservation Plan (CELCP). The CELCP provides an assessment of priority land conservation needs and clear guidance for nominating and selecting land conservation projects within the state. 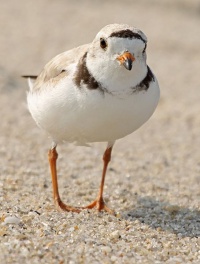 The piping plover is a small, sandy-colored bird that breeds on beaches from Newfoundland to North Carolina. The birds stay in this area from approximately late March until mid-September, when they fly south for the winter. Piping plovers build their nests in the sand on the beach near the base of the dunes, and lay a clutch of four eggs that hatch in about 25 days. Unfortunately, human pressures from increased coastal development and recreational beach use have had a detrimental effect on piping plover populations. According to the most recent estimate, there are fewer than 1,800 breeding pairs on the Atlantic coast. The US Fish & Wildlife Service (USFWS) Rhode Island National Wildlife Refuge Complex lists several threats that have been forcing the population into decline:

The piping plover has been protected as a threatened species under the Endangered Species Act since 1986. USFWS began efforts to manage the Rhode Island population in 1992, and the number of nesting birds has increased from 10 pairs in 1992 to 71 pairs in 2010. The nesting pairs produced 130 fledged chicks, which is a productivity rate of 1.83, surpassing their goal of 1.50 from the Atlantic Coast Piping Plover Recovery Plan. A review of the 2010 nesting season can be found here.

The Nature Conservancy of Rhode Island is also working to protect the piping plover. In 1989 the group purchased the Goosewing Beach Preserve, which includes nesting habitat for the piping plover. The Nature Conservancy has been managing the breeding population in the preserve for the past two decades. During the nesting season, the Goosewing Beach Preserve Manager and a Plover Warden monitor the population and educate visitors about these birds and other sensitive species.

More sources of information about the piping plover in Rhode Island include:

A collection of reports, databases, and data layers prepared by consultants for the North Atlantic Landscape Conservation Cooperative offers a birds-eye view of sandy beach and tidal inlet habitats within the U.S. Atlantic Coast breeding range of the endangered piping plover based on imagery from Google Earth, Google Maps, state agencies, municipalities, and private organizations. By comparing the location, status, and condition of potential plover breeding grounds from Maine to North Carolina during three distinct time periods -- before Hurricane Sandy, immediately after the storm, and three years after post-storm recovery efforts -- these inventories provide a habitat baseline that can help resource managers plan for future change.

The University of Rhode Island has published a Rhode Island Coastal Plant Guide and here is a list of invasive plant species.

The Nature Conservancy of Rhode Island opened the Benjamin Family Environmental Center in 2010. The Center is located at the Goosewing Beach Preserve, a protected area of coastal salt ponds, barrier beaches, and dunes. Visitors learn about local flora and fauna, and are encouraged to become better environmental stewards.

Friends of the National Wildlife Refuges-Rhode Island has a Barrier Beach Curriculum, a set of information and classroom activities to teach Rhode Island beach and coastal ecology.

The Coastal Resources Management Council is coordinating with Warwick, East Greenwich, government agencies, and community organizations to prepare the Greenwich Bay Special Area Management Plan. The SAMP is built on government cooperation and community participation. It is adopted into state and local law and recommends policies and actions that government can undertake to protect a complex natural resource that is part of a larger watershed ecosystem. The SAMP provides several mechanisms to coordinate separate governmental bodies, with its overall goal to promote effective coordination among the management authorities within the watershed. The SAMP will describe the present status of the bay, characterize its watershed, identify sources of pollution, and recommend steps to help government work with communities to restore, protect, and balance uses of Greenwich Bay for this and future generations.

Update: Rhode Island has completed the Greenwich Bay Special Area Management Plan. As part of the plan CRMC was able to reclassify waters in Apponaug and Warwick Coves from Type 3 to Type 1 and 2. This reclassification restricts marina expansion and other development along the reclassified shorelines.

The South Shore Habitat Restoration Project identified the need to restore eelgrass beds to areas of the shoaled tidal deltas in Winnapaug, Quonochontaug and Ninigret Ponds. The participants agreed that anadromous fish passageways should be restored for Cross Mills Stream and Factory Pond Stream. See a presentation on this project.