Staff at Virginia Institute of Marine Science (VIMS) estimate that of the 27 miles of open ocean coastline from the State line to Cape Henry, approximately 20 miles are eroding. Naturally accreting beaches include Croatan, Cape Henry and False Cape.

Studies show that approximately one-third of Virginia Beach’s 22.9 mile coast is experiencing moderate to severe erosion. The average erosion rates for this area are 7.3 feet/year. Some areas experience erosion as high as 10 feet/year.

The Shoreline Studies Program at VIMS is doing an aerial photo survey of the coast and is digitizing data of the ocean coastline. An analysis of historical shoreline change is part of this study. VIMS is preparing digital and hardcopy datasets for localities with "higher energy shorelines", based on a series of orthorectified aerial photography taken between 1937 and 2002. A beach buggy survey was also conducted at Dam Neck.

VIMS publishes Shoreline Evolution Reports and Shoreline Management Reports that detail down to the individual property scale, the condition of the shoreline (natural, bulkheaded, revetment, etc.). Although there are reports for Viginia Beach, they only cover the Chesapeake Bay shoreline and not the Atlantic Ocean shoreline.

VIMS has a list of beach erosion-related publications for Virginia Beach, Northampton County, and Accomack County. 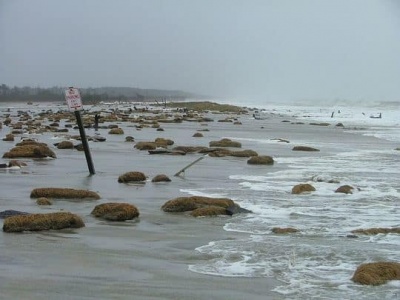 The geography of Virginia provides ample evidence for the rise and fall of sea level over the course of thousands of years. Today, the ocean is once again slowly encroaching upon the land. In Virginia, sea level has been rising at about one foot per century, and recent evidence suggests the rate may be accelerating. Changes in sea level are important in Virginia because it can threaten the extensive development that has occurred in the Hampton Roads area. These changes may also result in the potential loss of extensive tidal wetlands and shallow water habitats in the Chesapeake Bay, tributaries and the vast barrier island lagoon system on the seaside of the Eastern Shore.[1] The attempt at developing Cedar Island on the Eastern Shore is a cautionary tale for others who might contemplate building on these barrier islands. The last house there finally fell into the ocean in 2014.
The City of Virginia Beach surveys the coast of their city. In its 2002 Beach Management Plan, the city of Virginia Beach identified Chesapeake Beach as having "chronic erosion", Baylake Beach is "slightly accretional", the majority of Ocean Park Beach is erosional, Cape Henry Beach is relatively stable, areas of North End Beach vary from "naturally accretional" to "moderately erosional", Resort Beach is erosional (with a 50-year history of beach fill), Croatan Beach is historically stable with current localized erosion, and Sandbridge Beach has extremely high erosion rates (nourished for the first time in 1998). As much as 8 feet per year of beach disappears at Sandbridge because the shape of the ocean floor focuses wave energy on the shore. [2]

The beach survey data from both the City of Virginia Beach and the Navy are compiled by VIMS for a report to the Marine Management Service.

The Virginia Department of Conservation and Recreation and local governments regulate erosion and sedimentation for land-disturbing activities. http://www.dcr.virginia.gov/soil_and_water/e_and_s-ftp.shtml

The Virginia Energy Plan, Ch. 5: Energy and the Environment, says this:

"What does climate change mean for Virginia? Over the long term, climate change will affect Virginia's people, wildlife, and economy. The Virginia Institute for Marine Science estimates that the Mid-Atlantic sea level will rise between 4 and 12 inches by 2030, threatening coastal islands and low-lying areas."

Another source of information is Virginia Sea Grant

The Heinz Center's Evaluation of Erosion Hazards, conducted for the Federal Emergency Management Agency (FEMA), studied the causes of coastal erosion hazards and proposed a variety of national and regional responses. The study, published in April 2000, concentrates on the economic impacts of erosion response policies as well as the cost of erosion itself to homeowners, businesses, and governmental entities.

A NOAA website that has graphs of sea level data for many coastal locations around the country over the last 40 to 50 years and projections into the future is Sea Levels Online.

A related site launched in 2008 is NOAA Coastal Services Center's Digital Coast, which can be used to address timely coastal issues, including land use, coastal conservation, hazards, marine spatial planning, and climate change. One of the goals behind the creation of the Digital Coast was to unify groups that might not otherwise work together. This partnership network is building not only a website, but also a strong collaboration of coastal professionals intent on addressing coastal resource management needs. Website content is provided by numerous organizations, but all must meet the site’s quality and applicability standards. More recently, NOAA Coastal Services Center has developed a Sea Level Rise and Coastal Flooding Impacts Viewer as part of its Digital Coast website. Being able to visualize potential impacts from sea level rise is a powerful teaching and planning tool, and the Sea Level Rise Viewer brings this capability to coastal communities. A slider bar is used to show how various levels of sea level rise will impact coastal communities. Completed areas include Mississippi, Alabama, Texas, Florida, and Georgia, with additional coastal counties to be added in the near future. Visuals and the accompanying data and information cover sea level rise inundation, uncertainty, flood frequency, marsh impacts, and socioeconomics.